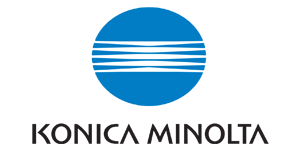 Always on the edge of innovation, Konica-Minolta released the Magicolor series of laser printers with polymerized laser toner cartridges. Using the Magicolor toner technology, digital images can be printed faster with less toner waste and improved color reproduction. Some of the most popular magicolor toners are the Konica-Minolta 2430 toner. Polymerized toners are different from other toners in that they use miniature toner particles that are chemically treated in order to adhere to a spherical particle of wax. This allows the ink to dry at lower temperatures which uses less energy, reduces imaging times, and emits fewer chemicals into the environment. In addition, Konica-Minolta cartridges, using this polymerized technology, have been improved to create a better overall color gamut and enhanced halftone definitions.

For high-performance, on-demand printing needs the Bizhub series of light production printers was released. These high-speed digital color printers were developed with the business owner in mind. They feature advanced network features, superior image quality, improved double-sided printing, and a highly efficient and earth friendly design. The polymerized bizhub toner produces sharp color images, spectacular photo details, and a 40% reduction in CO2 emissions. The cartridges are designed with an original toner recycling system that collects, recycles, and re-uses toner that is not transferred onto the paper resulting in a 20% waste savings.

No matter what your printing needs are, Konica-Minolta has a machine to fulfill your printing requirements. While both sides of the company started out as leaders in the photographic imaging arena, their innovative thinking and drive towards advanced performance have translated seamlessly into the business printing world, producing the highest quality machines on the market today.

Konica-Minolta is one of the oldest imaging companies in the world. As with many of the electronic businesses that exist today, Konica-Minolta started out with just a few enterprising individuals. In 1873, Rokusaburo Sugiura began selling photographic and lithographic materials inside his Tokyo, Japan apothecary business. As sales grew, so did the Konica Corporation, and in 1903 the company marketed Japan's very first brand name camera, the Cherry Hand Camera. Around 1928, Kazuo Tajima established a new Japanese-German photo company in Osaka, Japan, which eventually became known as Minolta. In 1929, they marketed their first camera, the Nifcalette, and over the years introduced the very first autofocus 35mm camera, the first 35mm camera with built-in flash, and the world's first copier with zoom magnification. One of their cameras was even taken into space by John Glenn in 1962 aboard the Friendship 7 spacecraft. Over the last century, both Konica and Minolta continued to develop new imaging products and technology; including, cameras, copy machines, laser printers, and medical equipment. In 2003 the two companies merged into Konica-Minolta and by 2007 the newly formed company decided to stop producing camera equipment in order to focus more fully on their business equipment and printer toner products instead.