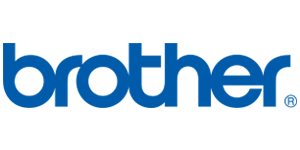 Brother inkjet ink tanks are available in both standard and high yield tanks and come in a four cartridge system. Each high yield Brother ink cartridge can print up to 900 pages in black and 750 pages per color. Because Brother inkjet cartridges come in four individual tanks, you'll save money by only replacing each color tank as needed. Laser printers also utilize individual color toner cartridge units. The high capacity paper trays can hold up to 350 sheets of papers ranging in size from 3.5" x 5" index cards to 11" x 17" ledger papers. In addition, the 50 sheet automatic document feeder will allow you to fax, scan, or copy projects unattended.

Brother inkjet printers and Brother ink cartridges have come a long way since they replaced dot-matrix printers. They continue to provide impressive results that are reliable and at faster speeds than their competition. As printer technology has advanced, Brother Industries has always been ahead of the curve in producing high quality printers at an affordable price.

The world's first high-speed dot-matrix printer was produced by Brother Industries in 1971. The initial technology of the dot-matrix printer had been introduced a year earlier by a competing company which could produce 30 characters per second and 80 columns of characters per page. It was slow, clunky, and very noisy, but it was a vast improvement over typewriters and daisy wheel printers because it could print a variety of different font styles and graphics rather than just standardized lettering. Brother, in conjunction with Centronics, took this new technology and improved upon it by making it faster and more reliable. The Model 101 dot-matrix printer could produce 165 characters per second and Brother focused on marketing it as a low-end line printer. As they made improvements to the dot-matrix technology, they also designed the first parallel port interface to connect printers to computers and this became the standard connection method of most printers until the introduction of the USB port twenty years later. For the next two decades, dot-matrix printers dominated the marketplace and were the most common style printer until it was replaced by the inkjet printer in the 1990s.

Today, Brother continues to offer a wide variety of color inkjet printers and high quality printer ink at an affordable price. Where dot-matrix printers used to just produce one line of text at a time, the all-in-one inkjet printers of today can print, copy, scan, and fax at the touch of a button. Their high-end inkjet models feature automatic duplex printing, built-in wireless networking, high capacity paper handling, auto document feeders, and media slots that allow you to print photos directly from your camera or memory card. You can achieve professional print results with droplet sizes as small as 1.5 picoliters which can produce high quality resolutions up to 6000 x 1200 dpi. They're incredibly fast too with 35ppm in black and 28ppm in full color.